Introduction and a Word About Process

With the excitement of AIPAD and Keliy Anderson-Staley's opening a bit behind us here at the John Cleary Gallery I thought I would take the opportunity to formally introduce myself as your new resident blogger! 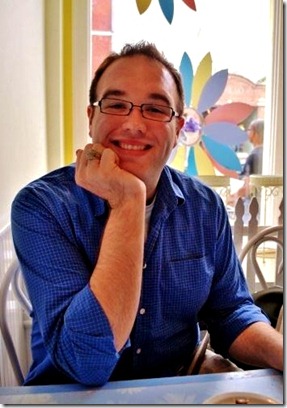 So? hello all, my name is Joseph and even though I'm only filling in briefly for a couple of months as the Assistant Director I couldn't be more thrilled to be surrounded day in and day out by such fantastic photography.

A little bit about myself: Like Catherine, I also grew up in small town Crockett, Texas deep in the Piney Woods (or behind the Pine Curtain as a dear friend of mine puts it).  Interestingly enough, Catherine lived only a couple of houses down from me on Easy Street and both of her parents were my teachers in high school, so when she provided me the opportunity to work with her I jumped on it! (Is there a word for the neighborly equivalent to nepotism??)

I attended Baylor University and the University of Michigan in Ann Arbor for degrees in vocal performance and opera and moved to Houston this last August in order to pursue that career back in my home state.  I have a great affinity for photography, but as my background focuses more on the aural arts than the visual I figured this would be as great a time as any to brush up on my photographic lexicology.

So with that in mind I decided to start an ongoing series on the blog that delves into the different processes involved with fine art photography and how it relates to our collection here at the gallery.  For our inaugural post I figured it would be appropriate to cover those used by Keliy Anderson-Staley in her exhibit Imagined Family Heirlooms.  (All information provided by the artist.)

The photograms interspersed with original and found tintypes in the Imagined Family Heirlooms arrangements were made using a variety of printing techniques.  Photograms were used by William Henry Fox Talbot and Anna Atkins in the early 1840's and then were popularized by man ray in the early twentieth century.  Photograms are created by exposing sensitized paper to light while an object is on top of the paper.

The cyanotype, also known as the blueprint process,  was first introduced by Sir John Herschel (1972-1871) in 1842.  Herschel was an astronomer, trying to find a way to copy his notes, who stumbled upon a simple chemical reaction that allowed paper to retain images exposed by light. In addition to his invention of these processes, Herschel lef his mark on the art by coining the terms photography, negative, positive,and snapshot. 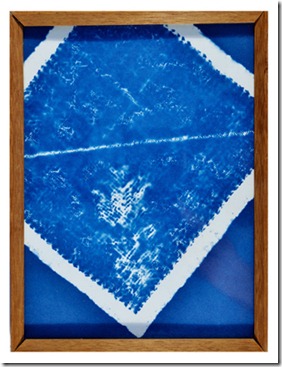 The argentotype, an iron-based silver printing process, produces brown tinted images and is another alternative method invented by Herschel.  This particular method is also father of sorts to the similar processes of van dyke brown, argyrotype and kallitype. 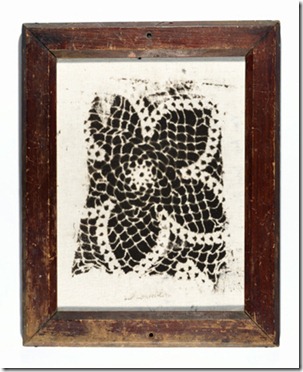 The van dyke process gets its name from its similarity in color to the deep brown pigment used by the Flemish painter Sir Anthony van Dyck. 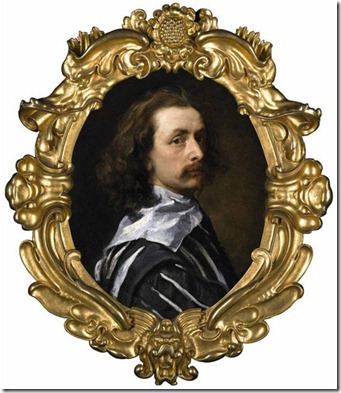 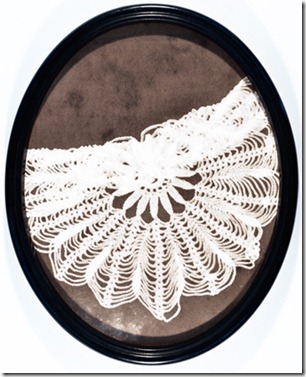 Like cyanotypes, van dyke brown prints are simple and economical to make, with the sensitizer consisting of three readily available chemicals.  Both processes utilize the action of light on ferric salts.

The tintypes in the exhibition are made with the wet plate collodionprocess that was invented about 10 years after the cyanotype.  The collodion process also makes use of the light reactive properties of silver and iron.  One principle difference between the tintypes and the photograms is that a camera (or little room--in this case a wooden box) and a lens were used to focus the light reflecting off a person directly onto a surface. 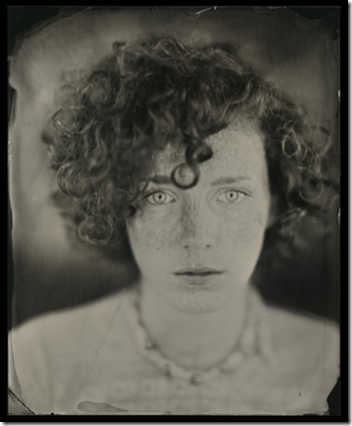 The surfaces for the tintypes in this exhibition are blackened aluminum sheets that were coated with a collodion mixture (gun cotton dissolved in ether) that creates a papery emulsion skin across the surface of the metal.  The plate is then treated with a light-sensitive mixture of silver nitrate salts, exposed to light, and then quickly, while still wet, developed in a bath of ferrous sulfate.  The image is then fixed in a bath of potassium cyanide.

A word, too, about the images used in The Baking Pan Series.  The production of these works were accomplished by treating old and rusted baking pans with photographic chemicals and exposing images and text directly onto the metallic surfaces.  Betty Crocker this ain't! 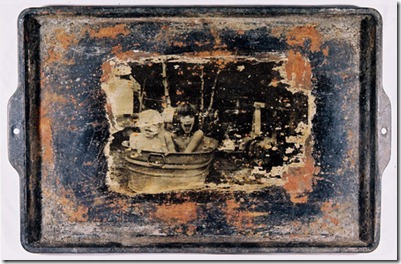 from The Baking Pan Series, 2010.  Liquid emulsion on found metal.

And with that I think I'll bring this lesson on process to a close for the time being. Now that we've been formally introduced please feel free to stop in any time to the gallery with questions regarding Keliy or any other photographer's work or just to say "hello."

For a bit of shameless blog promotion, take some time to check out my own personal blog, ub-SESSED: infatuations in the age of attention deficiency, for more musings on art, pop culture, and all the random ephemera of my life that rests in between!