The John Cleary Gallery is excited to announce the release of a new, special edition print by Rolfe Horn: 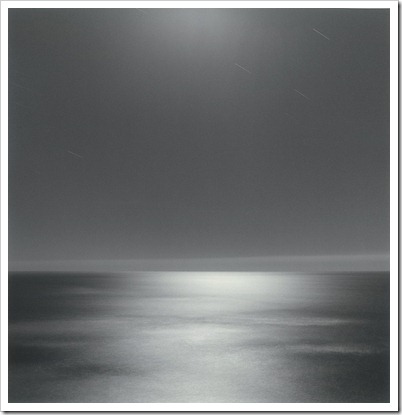 In addition to being produced in a special limited edition of 25, Rolfe has also introduced a different size and toning method not traditionally used in his previous work, making it all the more rare.

The image size is around 15 x 15 inches, printed on 16x20 paper and made on Bergger triple weight paper, rich in silver, a luster finish and has an ivory tint to the base of the paper.

The prints were then toned in gold chloride, giving a slightly bluish cast to the mid-tones and shadows, and also makes
the prints much more archival, as the silver is coated with gold.

As you can see, the glow of the moon (out of frame) is centralized at the top of the image, the ocean below is silvery with the reflected light.  As the paper is of luster finish, the scan can't quite do it justice.

It is a photo of nothingness, yet it is a scene which massages the mind into a calmer state of being.

Please note, as the print is being produced in such a limited number--and previous special edition prints by Rolfe have historically sold out in less than a month-- it would be much safer to purchase "Twelve Stars" sooner rather than later.  With the holidays quickly approaching now's the right time!